FSG was engaged by Lend Lease Engineering on the NCIG Rail Flyover project in Newcastle in early 2014 to perform detailed analysis of rail bridge foundations and global stability assessment of the reinforced soil walls. The project involved the design and construction of bridge foundations and 8m high reinforced soil retaining walls, on a site that was underlain by uncontrolled fill material placed over a significant thickness of soft sedimentary soils. An innovative subcontractor alternative had been proposed however significant concerns were raised during the initial review phase regarding the lateral stiffness of the proposal alternative and the ability of the piles to resist lateral displacement of the soft soils caused by the embankment construction. As the alternative design offered considerable savings, FSG were engaged undertake a detailed of the alternative with a brief to incorporate as much as possible of the subcontractors alternative into that design.

FSG carried out detailed 3D modelling of the abutment fill and reinforced earth structure, in order to assess vertical and lateral movements at the surface and within the sub-surface profile. The subcontractor’s precast pile bridge foundations were incorporated in the model to assess the loads in the piles under the modelled ground movements. FSG were able to retain the subcontractors alternative precast pile solution with minor adjustments to the upper pile sections. FSG’s analysis also delivered a reduction in the total number of piles. 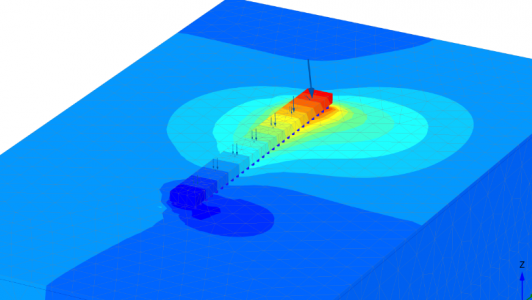 This highly economical alternative foundation system was accepted and successfully installed on the project by Wagstaff Piling in 2014, providing an example of the value that can be delivered by well targeted analytical modelling, integrated with high level constructability and commercial understanding. 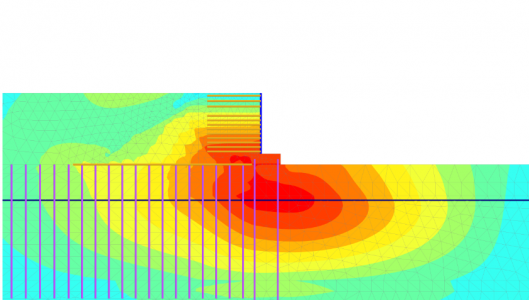